Live to Eat: 10 Cultural Cuisines You Must Try — Foster's Supermarket

Live to Eat: 10 Cultural Cuisines You Must Try

Some people say you should eat to live, but we believe it’s much better living to eat. Living to eat goes beyond indulging your taste buds. It encompasses the entire sensory experience – sight, smell, sound, sometimes touch, and only then…taste! However, it doesn’t stop there. Living to eat is about more than just-food. It includes what makes food meaningful to and for us – the togetherness, creativity, and blending of cultures!

That’s why we’re showcasing 10 different countries, their cultural influences on food, and what their cuisine means to them. Check out our stops below! 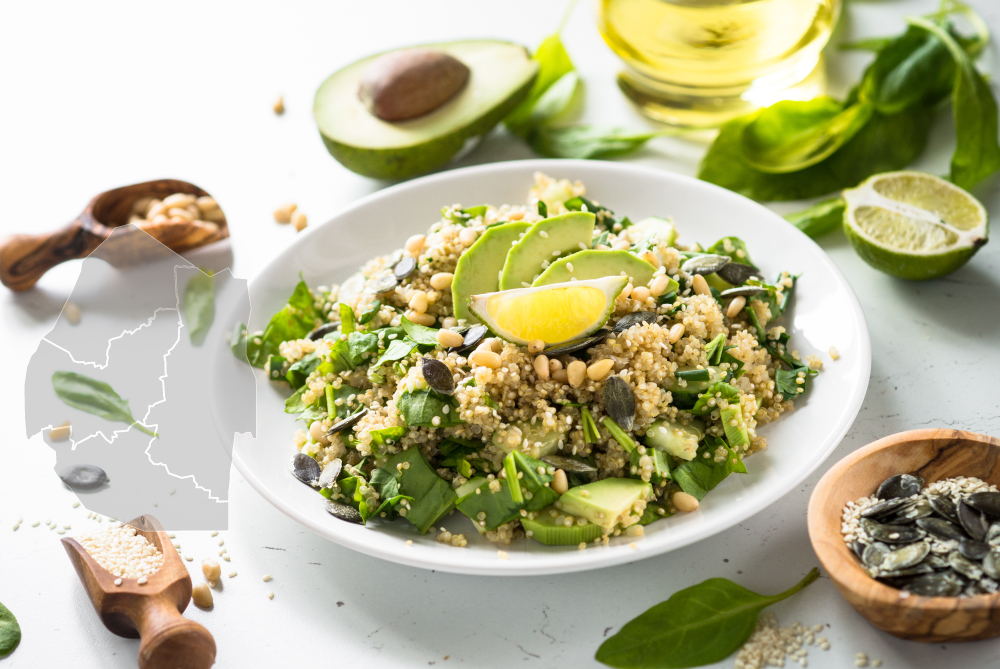 Swaziland (Eswatini) is a small monarchy in southern Africa known for festivals and wilderness reserves showcasing their traditional culture. They are a country known for its diverse wildlife and cuisine. Some of their staple food ingredients include sorghum (a flowering plant), and maize (corn). Eswatini’s farming industry mainly depends on the exportation of goat meat and beef, along with the growth of sugar cane, tobacco, rice, corn, and peanuts. So, it’s no surprise then that Slaai is a traditional, tasty dish that was created there.
Slaai translated means, simply, a salad. Eswatini’s Slaai is traditionally made up of avocado, coconut, ginger, and peanuts!

Take a look at some more delicacies from Swaziland here! 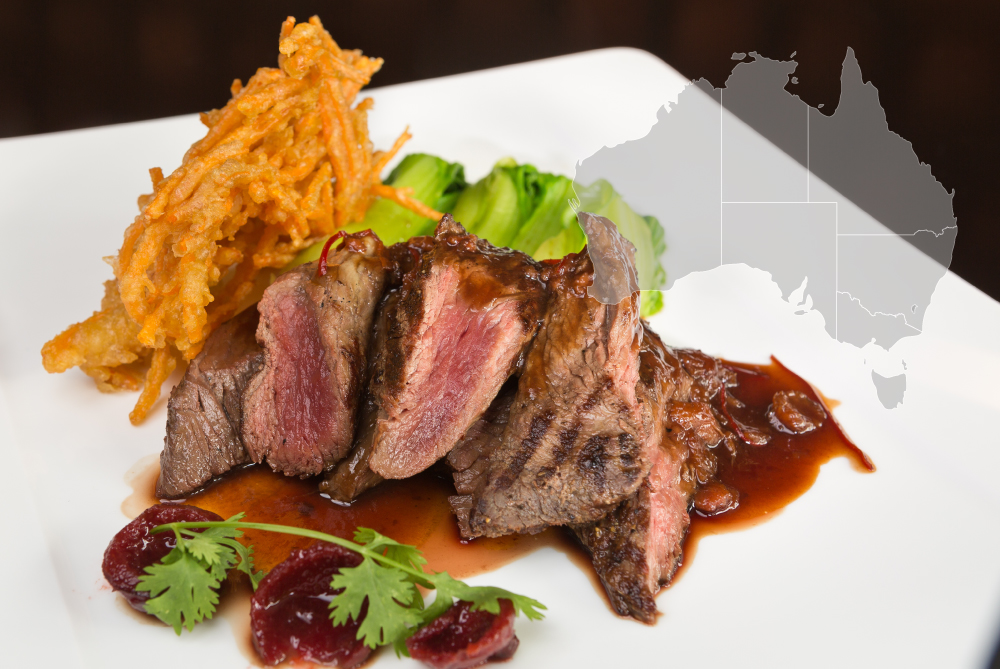 Australia is a melting pot of multicultural influences, indigenous ingredients, and a diverse selection of animals for tasty cuisine! Some interesting dishes include barbequed Emu (a large wild bird) and Barramundi (a large river fish). However, there is one animal indigenous to Australia that is well known for its gamy taste and flavor, kangaroo! Historically, kangaroo has long been a staple source of meat due to being high in protein and low in fat.
Traditionally, Kangaroo in Australia is prepared similarly to other types of meat – steaks, burgers, sausages – grilled. Kangaroo is said to taste like a cross between venison and buffalo meat, or even beef. It can also dry out very quickly if left on the barbie too long.

Check out some more traditional dishes from Australia here! 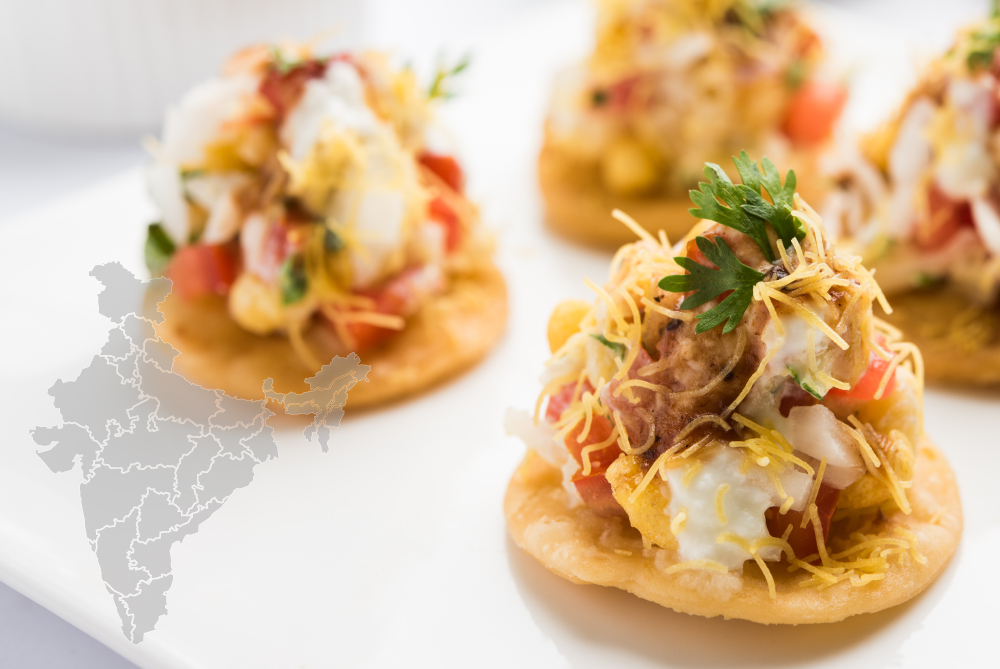 India’s food is famous for its unusual and complex spices that add a ton of flavor to any meal. However, India’s cuisine is influenced by many cultures. For example, its naan, and the rich red curry made from tomatoes actually stems from Asian and Portuguese influences, consecutively. Nevertheless, stocking your kitchen with some of the essential ingredients found in Indian cuisine makes it easier for you to make some of their traditional, flavorful dishes like tandoori chicken to palak paneer. Potatoes, tomatoes, cauliflower, carrots, and peas, are just some of the staples found in contemporary Indian cooking.
Speaking of contemporary Indian cooking, one cannot forget to mention the most popular North-Indian snack, Papri Chaat. Papri Chaat is thin deep-fried dough wafers that are topped with a number of different ingredients, including potatoes and chickpeas, and tangy, spicy, and sweet sauces.

Indulge your curiosity with more traditional dishes from India here! 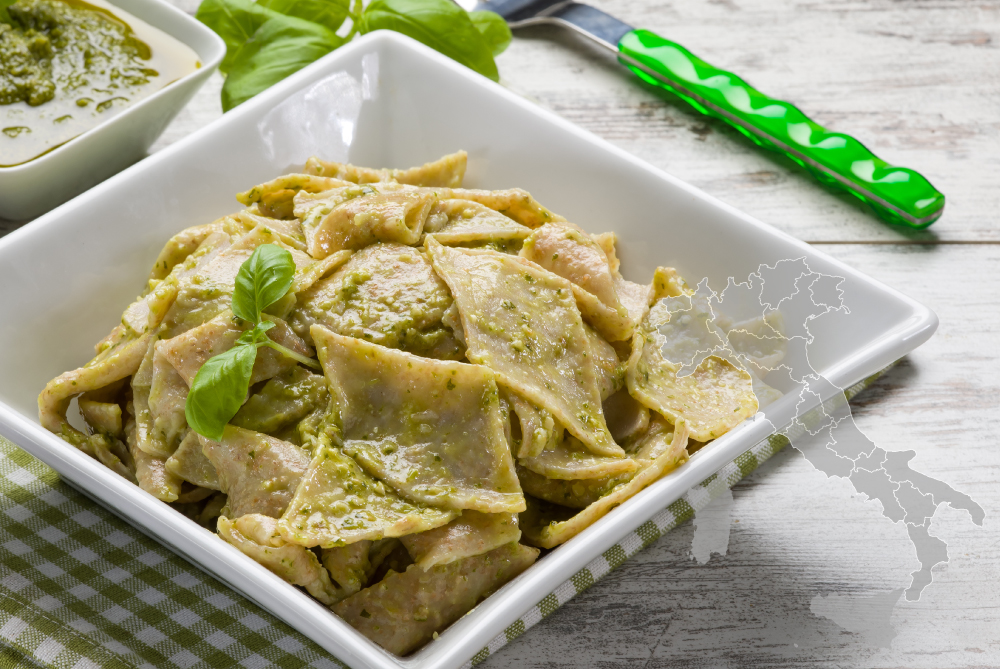 Of course, when thinking of Italy, pasta and pizza might be the first traditional dishes that are mentioned. Italian dishes are deeply rooted in their culture, with recipes often passed down between generations, and cherished for its authentic origins. However, the cities within Italy are also known for very specific food innovations. For example, The Gulf of La Spezia (a port city in Liguria) is known for its local sea cuisine, namely, for the breeding of mussels. La Spezia is also known for providing alternative foods (cheap and filling) to the traditional pasta and pizza that’s always seen. For example, they have their very own unique sauce, known all over the world as Genoese Pesto! This is important because it’s necessary to be added to one of La Spieza’s staple dishes – Testaroli!

Testaroli’s are made of a mixture of water, flour, and salt, are quickly boiled in water and topped with pesto, sauce or oil and parmesan cheese. The pesto in Testaroli is the highlight of the dish, considering that Liguria grows the basil plant that is said to create the best pesto. 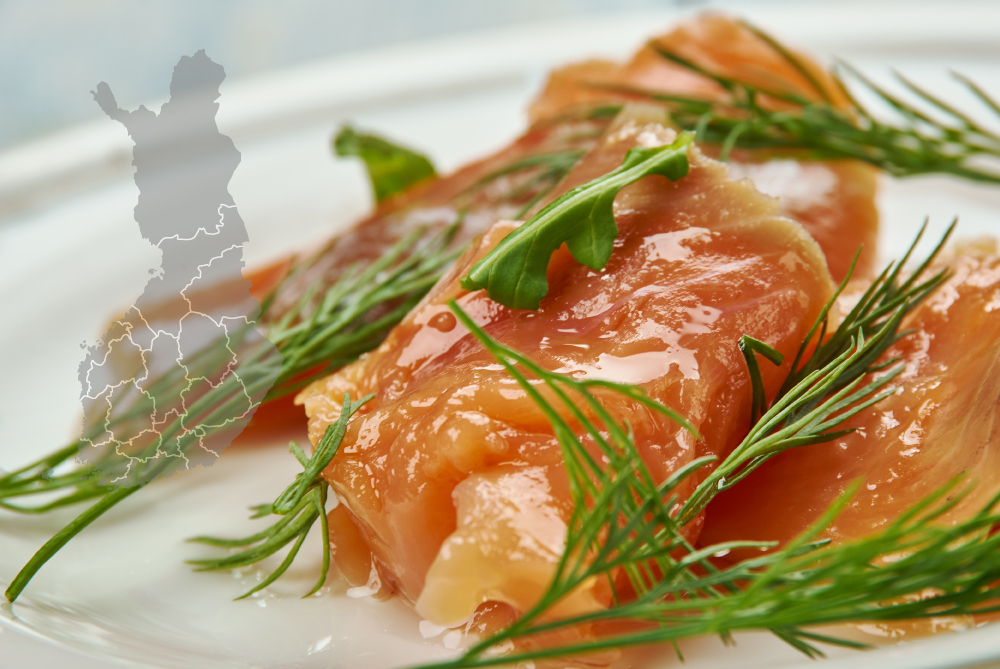 Known as the happiest country in the world, one can only assume that Finland’s cuisine is just as dopamine inducing! Finnish food is light, fresh, simple, and includes plenty of local ingredients like golden chanterelle mushrooms, new potatoes, and root vegetables. Most of Finland’s food ingredients are sourced from its forests and lakes. The country is home to some of the freshest fishing sites, and many local residents love their salmon. Hence, the creation of one of their staple dishes, Graavilohi.
Graavilohi is a dish made from raw salmon which has been cured in salt, sugar, and dill. This thinly sliced Finnish cuisine is often served as an appetizer alongside a dill or mustard sauce on bread or with boiled potatoes.

Take a look at some more traditional dishes from Finland here! 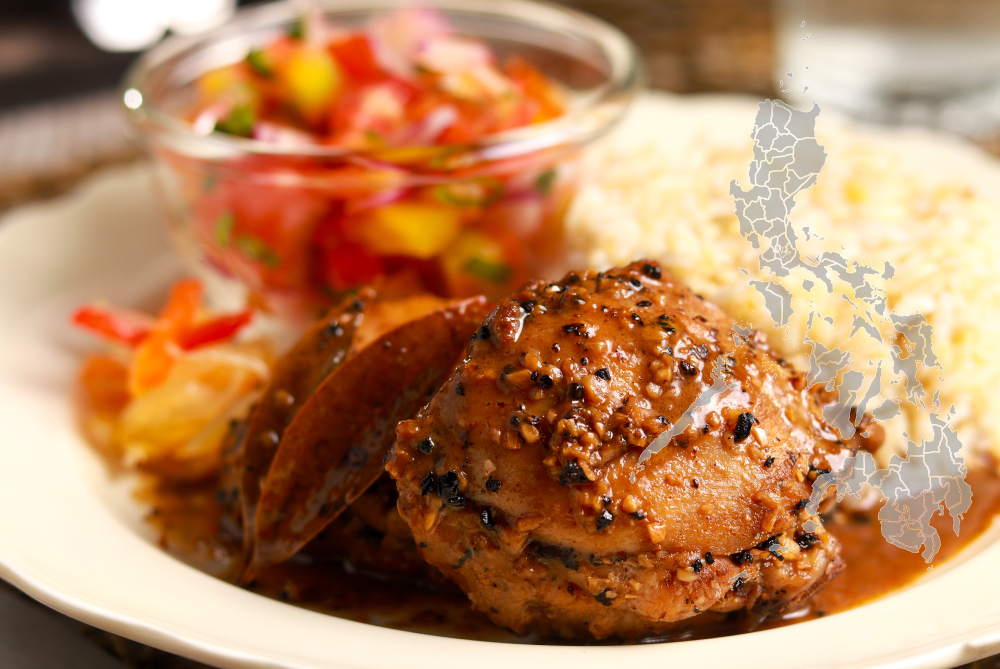 The Philippines’ cuisine is one of the most unique cuisines in the world because of the many foreign influences that have successfully melded with local food norms. Countries that influence Filipino cuisine include China, Japan, Spain, America, Great Britain, India, and even Mexico. This makes it difficult to truly define Filipino food, but there are some tasty dishes from there that give a clearer picture, like Adobo!
Adobo is a traditional, popular Filipino dish and cooking process that involves vegetables, seafood or meat marinated in vinegar, soy sauce, garlic, and black peppercorns. The mix is then browned in oil and simmered in the marinade.

Take a look at some more traditional dishes from the Phillippines here! 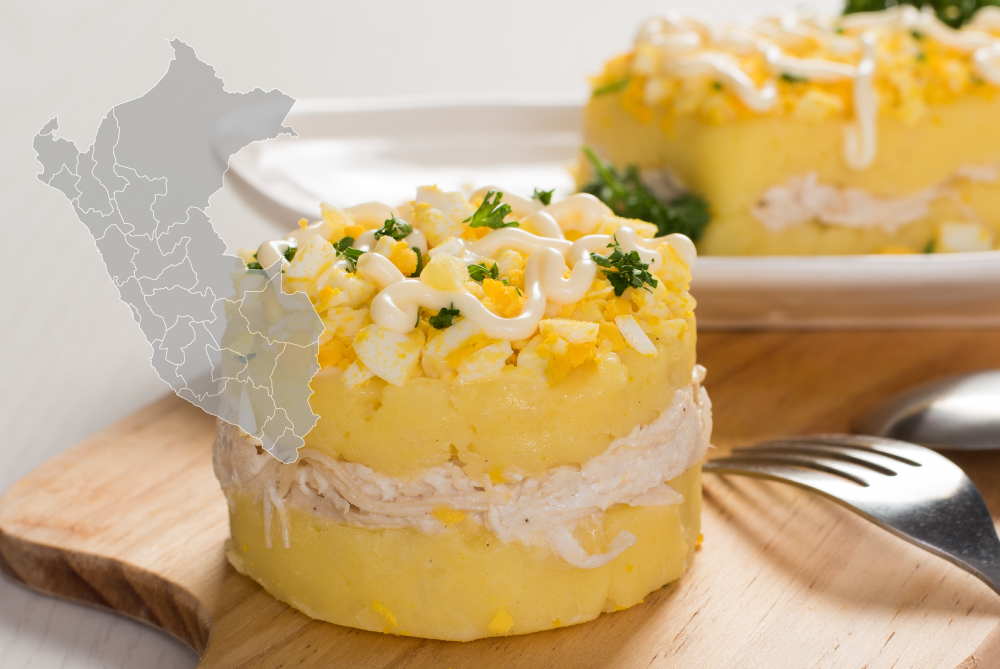 Traditional Peruvian cuisine is made up of three different categories – mountainside, rainforest, and of course the seaside and gains its influence from a ton of different countries including Spain, China, and France! This can be seen in some of their hybrid dishes, including Lomo Saltado, a beefsteak stir-fry with onions, tomatoes, and French fries! There’s one dish, however, that brings all cultural influences together in a scrumptious swoop – Causa Limeña.
Causa Limeña is a very simple dish that adds life and flavor with only three ingredients – seafood, potatoes, and pepper! In Peru, this dish is traditionally eaten as a starter, canapé, or as a side to a Peruvian spread.

Take a look at some more mouth-watering dishes from Peru here! 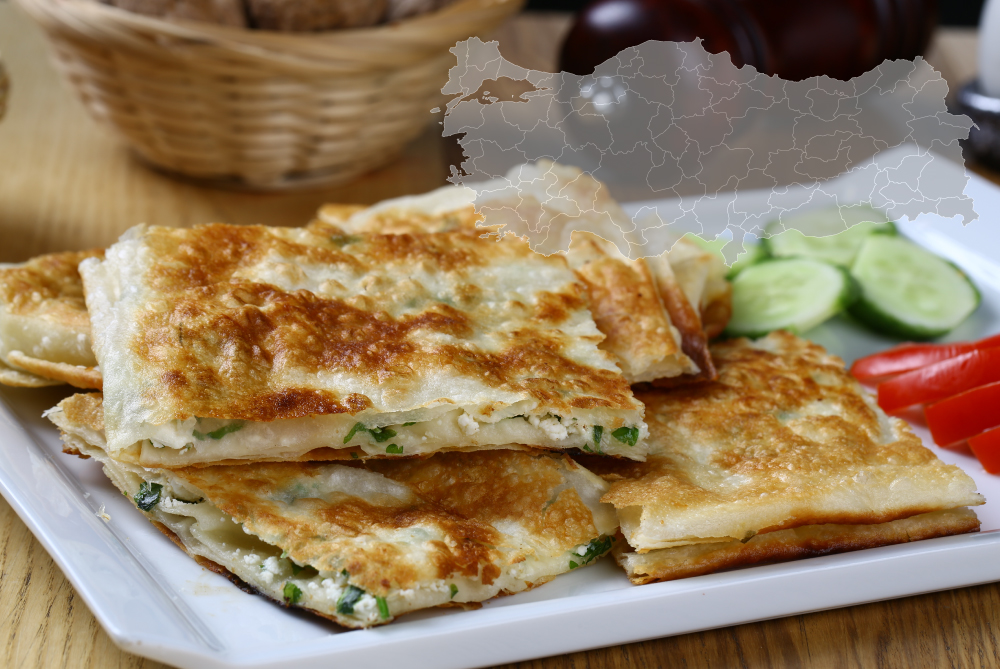 One can only hope to be allowed a safe space where their gluttony can run free without judgment…well, Turkey, is that place. Turkey is home to many savory, rich, appetizing foods that don’t overkill the taste with spice. In fact, the influence of Turkish cuisine can be seen throughout restaurants all over the world – especially pertaining to Ottoman cuisine! From kebabs to koftas, Turkish food brings out the foodie in you, and this traditional Turkish dish, Gözleme, is no exception.
What is Gözleme? Well, we thought you’d never ask. It’s a tasty flatbread dough with savory fillings like spinach, feta, lamb, or beef! The recipe is very simple, and sometimes, so are the best things in life.

Check out some more mouth-watering dishes from Turkey here! 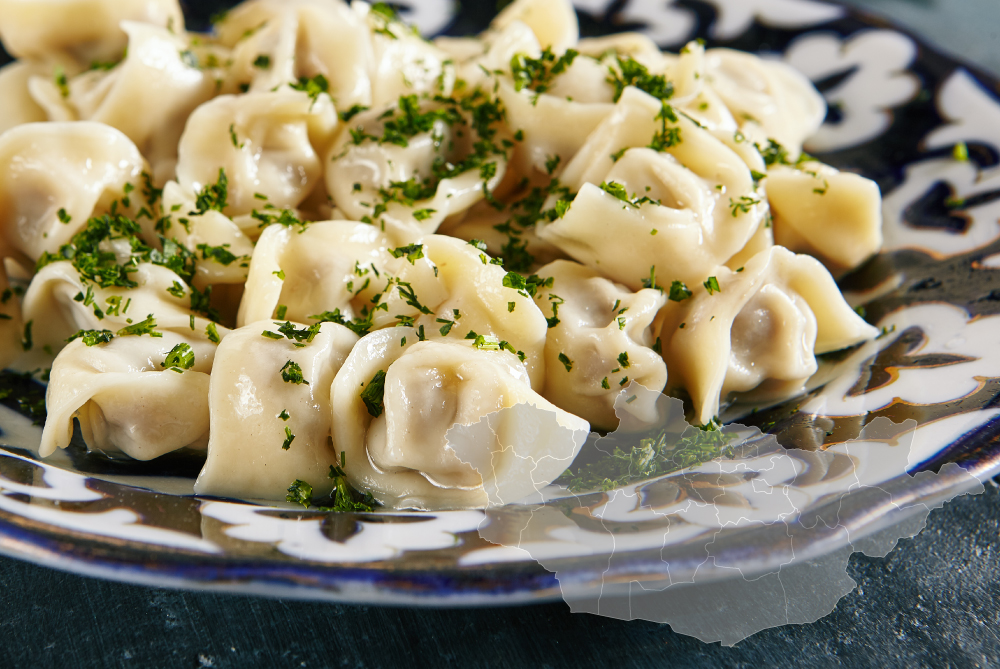 Mongolian cuisine is greatly influenced by Russian and Chinese cultures. The cuisine mostly consists of meats (horse, yak, beef, lamb, and camel), animal fats, and dairy products. Meat and dairy are said to be the main food delicacies of Mongolian cuisine, with the use of vegetables sparse. One of the most common meats used in Mongolian cuisine is that of Mutton (adult sheep meat). This can be seen in Mongolia’s national dish – Buuz. Buuz are steamed flour dough dumplings that are typically filled with mutton, or shredded beef, cooked with onion, garlic, and pepper, and then steamed.
Often times, Buuz is served on its own or as a starter and is a very popular dish around rural areas of Mongolia. The taste is similar to that of dumplings; however, Buuz gives a more intense, spicy zest.

Indulge in some more tantalizing cultural dishes from Mongolia here! 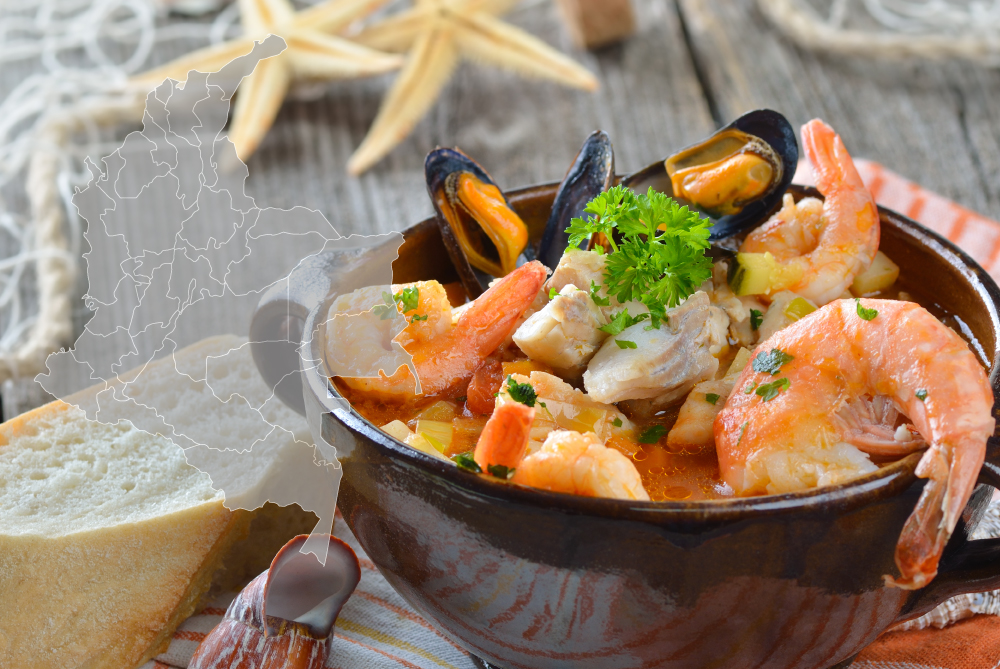 Colombian cuisine is filled with foods that range from salty to sweet, hearty to light, and last but definitely not least – cheesy and savory. With influences from European countries and indigenous tribes, it’s safe to say the cuisine of this country will blindside you with delicious flavors. Becoming independent after ruling under Spain, food in Colombia has many Spanish influences with a definite highlight to their meats, potatoes, beans, corn, and rice. Bordering on the Caribbean and Pacific Oceans, one may think that Colombia knows a thing or two about seafood cuisine…and one would be right! That’s where the dish of Cazuela de Mariscos comes in – one of the most enjoyed meals in Colombia.

Cazuela de Mariscos is a thick, hearty, seafood stew or soup bathed in a broth of coconut milk that can include lobster, shrimp, white fish, and vegetables.

Sneak a peek at some more delectable dishes from Colombia here!

Living to eat is about what food means to you, and for us, food is a lifestyle.